Dayton Moore, the architect of the 2015 World Series champion Kansas City Royals but the steward of a franchise in the midst of its sixth consecutive losing season, has been relieved of his role as president of baseball operations. Royals owner John Sherman announced the firing at a news conference on Wednesday afternoon, in what could be the first in a series of sweeping changes for a team that fell far short of expectations in 2022.

“Dayton resurrected this franchise. It was not in a good spot,” Sherman said Wednesday. “Today I want to make sure that my feeling is gratitude.”

Moore had overseen the Royals since 2006. J.J. Picollo, his longtime lieutenant, took over as general manager near the end of the 2021 season. Sherman said Wednesday that Picollo will take over the baseball operations department moving forward.

“I’m really thankful for the opportunity,” Moore told The Athletic. “I’m proud of our culture and what we accomplished in Kansas City. I’m disappointed we weren’t able to see it through. But I have confidence in John Sherman, J.J. Picollo and the entire baseball operations department to finish it off.”

Moore’s era will end with a club stocked with intriguing talent, like 22-year-old shortstop Bobby Witt Jr., but struggling to compete at the big-league level. The fate of manager Mike Matheny, whose option for 2023 was exercised by the Royals on March 31, is also in question, with Sherman indicating that any decision on Matheny’s future will be left to Picollo. The Royals entered Wednesday 22 games out of first place in the American League Central. The team has struggled to develop a second generation to replace the wave of homegrown players, like Alex Gordon, Eric Hosmer and Mike Moustakas, who powered the team to back-to-back American League pennants in 2014 and 2015. 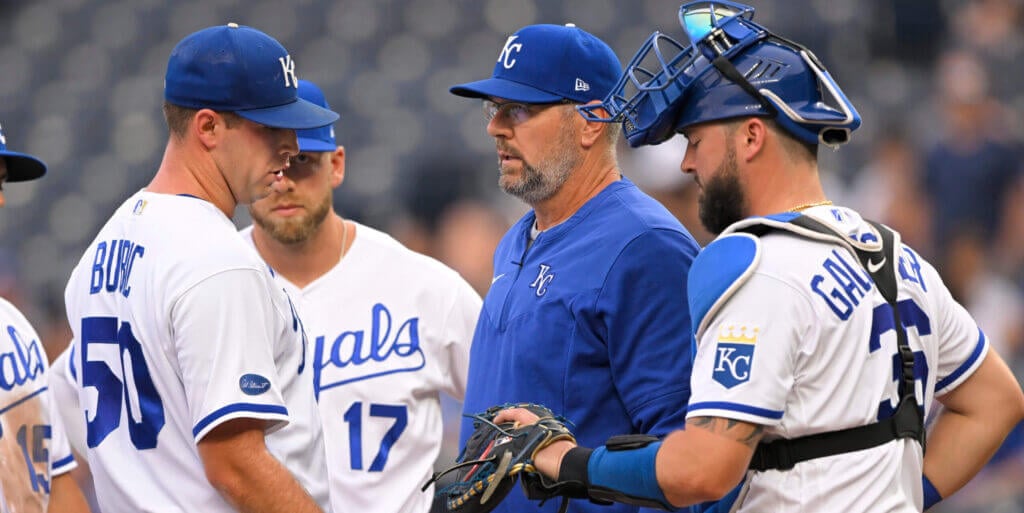 The Royals’ rebuild was supposed to be built on pitching. What has gone wrong?

When he arrived in 2006, Moore inherited a wreck of a franchise. The Royals had not reached the postseason since 1985. With painstaking patience, Moore and his cohorts rebuilt the club into a champion. But the franchise struggled to transition into a new phase after players like Hosmer, Moustakas and Lorenzo Cain departed in free agency.

The team had staked its hopes of a second shot at contention on a collection of pitchers taken in the first two rounds of the 2018 draft. Five years later, only one, Brady Singer, was thriving in the majors, leading to questions about the viability of the team’s development system, a necessity for a franchise that declines to spend lavishly in free agency. Before purchasing the Royals in 2019, Sherman had been a minority investor in the Cleveland Guardians, who have built a pitching pipeline despite similar budgetary restrictions.

Moore, 55, came to Kansas City after a lengthy apprenticeship with the Atlanta Braves. He began his career as a college coach, and referenced that history when discussing his future.

FMIA Week 4: Hurts at Home in Philly, Players and Parents on Football Safety,

Phillies clinch playoff spot for first time since 2011 in…