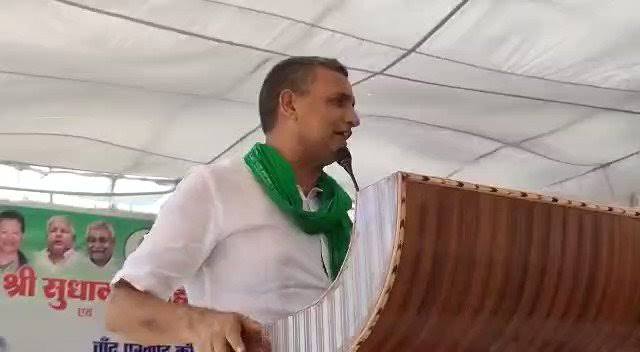 Bihar Agriculture Minister Sudhakar Singh, who has always been in the news for controversial remarks, today resigned from Nitish Kumar’s cabinet. This was confirmed by Bihar Rashtriya Janata Dal (RJD) President Jagdanand Singh. He is also the father of Sudhakar Singh.
Bihar Agriculture Minister Sudhakar Singh was in the discussion last month regarding one of his statements. Sudhakar Singh had said in a meeting in Kaimur that there are many thieves in the Agriculture Department, he is the chief of thieves and there are many thieves on him too. After the controversy over this statement and interrupted by CM Nitish Kumar, Singh had said that he stood by his statement, if he wanted to resign.

Last month, the politics was heated due to the statement of Bihar Agriculture Minister Sudhakar Singh. Later, after the cabinet meeting held in Patna, Chief Minister Nitish Kumar interrupted Sudhakar Singh and said that he should exercise caution and restraint in making public statements. On this Sudhakar Singh had said that he stands by his statement and can resign if he wants. After that they had left from there. As soon as this news was leaked, Sudhakar Singh said that whatever party supremo Lalu Yadav and Tejashwi Yadav say, they will be accepted. They would like those people to give them directions.

Sudhakar Singh had said in a meeting in Kaimur that there is no such part of our department which does not steal. This is how we became the chieftains of thieves. If you keep burning effigies, I will remember that farmers are angry. If you do not do this, then I will feel that everything is going well. Lohia ji had rightly said that if Parliament becomes ours, then people should come out on the road. We are not the only Sardar, there are many people above us too. He also said that instead of helping the farmers of the seed corporation, they steal 100-150 crores.

Asylum seekers with diphtheria contracted the disease BEFORE arriving in UK,

Five top-shelf gifts for the liquor cabinet, each made in Ulster County

Cabinet expansion will be done after Gujarat elections: CM Bommai

Trump hosted Holocaust denier to Mar-a-Lago club alongside Ye, a week after

PM Mitsotakis to Cabinet: Our economic policy transmits a message of confidence

UK limits use of Chinese-made surveillance systems on government sites

Asylum seekers with diphtheria contracted the disease BEFORE…

Licking County Times
Prev Next 1 of 392