Stepping inside the Jeff Ditzell Psychiatry clinic in the financial district of Manhattan, it feels more like a luxury spa than a medical facility.

But customers come here for something far more powerful than a deep tissue massage or hot yoga session — they come for the ketamine.

A medical loophole means facilities like this one can offer the hallucinogen, which was first developed as a horse tranquilizer and has become popular among ravers, for people with depression.

Far from the party atmosphere that typically surrounds ketamine, the person receiving the infusion at Dr Ditzell’s clinic is taken into a dimly-lit room where they are surrounded by plants and colorful abstract art.

They are put in a leather reclining chair whose back is enveloped in a white pod reminiscent of an Elon Musk  SpaceX invention. It puts the patient in partial darkness to induce relaxation while they get hooked up to an IV for a roughly 40-minute infusion.

Patients spend the next hour outfitted with a sleeping mask and headphones playing theta brain waves, which are at the dominant frequency in healing, high creative states, and remembering emotional experiences.

Dr Jeff Ditzell told DailyMail.com: ‘Essentially, the music and the aromatherapy that we have going as well as the calm setting, warm lights and all that, the comfortable space that’s dedicated to the ketamine infusion is really key in getting a good response.’

His clinic, which is just a stone’s throw away from Wall Street, has attracted bankers with deep pockets looking to escape from the madness of the trading floor.

Ket clinics have been appearing across New York at a rapid rate and they are now staring to crop up in other major US cities like Houston, Miami, Los Angeles and Seattle.

There are estimated to be over 100 nationwide now compared to just a handful a decade ago. It comes after several recent studies indicated a low dose of the drug may help treat depression and PTSD. 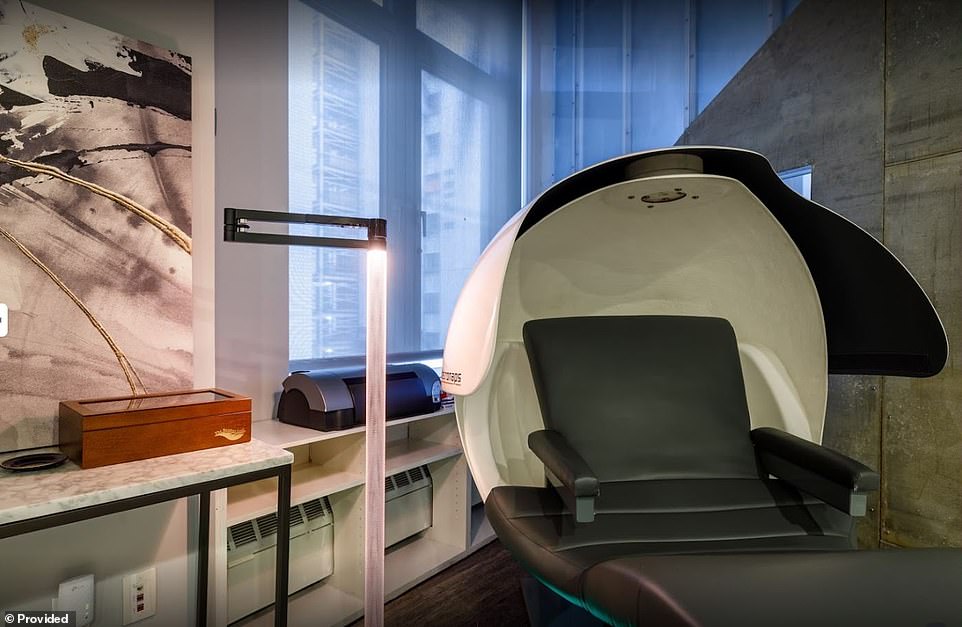 Patients undergoing ketamine treatments recline in a leather lounge chair that resembles a SpaceX device designed by Elon Musk, a feature meant to cocoon the user and foster introspection. Ditzell is committed to providing clients with a good trip, he told DailyMail.com. The office is festooned with abstract art, ambient lights, and potted plants 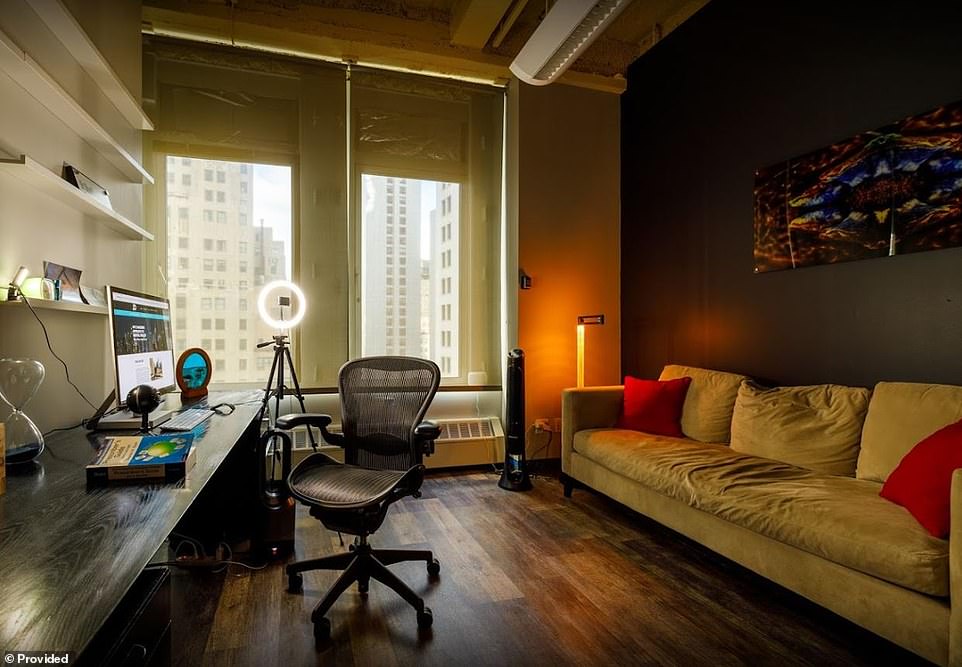 Ketamine infusions are for people with debilitating depression who have tried several other courses of treatment including antidepressant medications with little or no relief. Before it was known as a party drug that could produce out-of-body experiences, ketamine was used as an anesthetic in surgical procedures. Since then, it has been prescribed ‘off-label’ for treatment-resistant depression 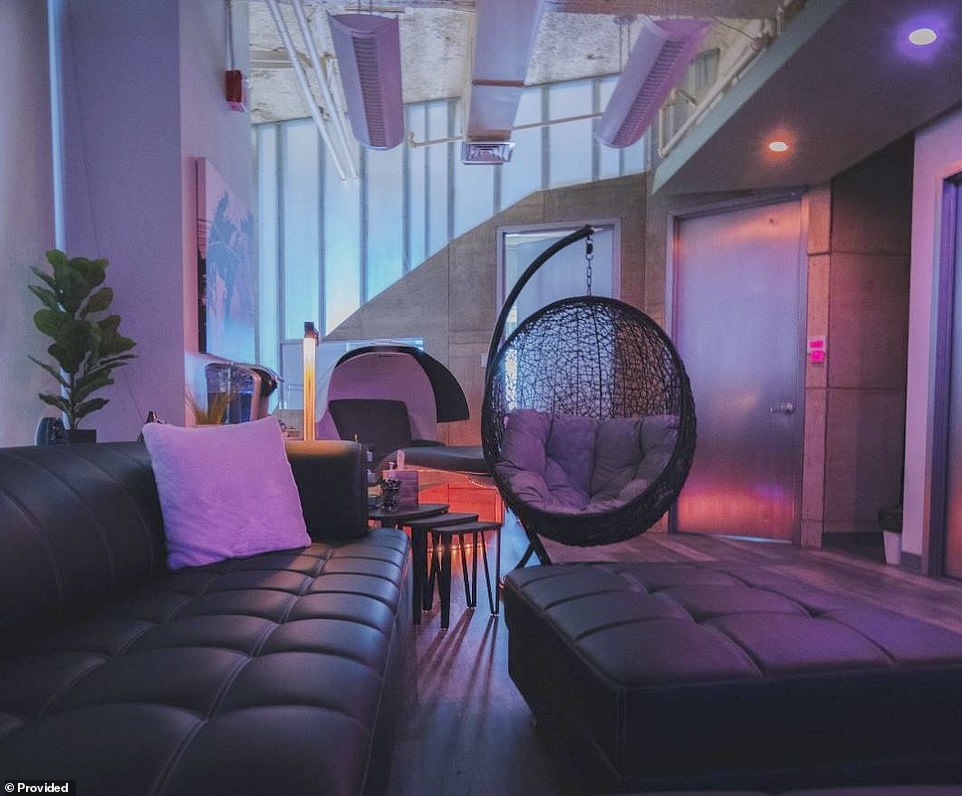 Ditzell’s office, which is just a stone’s throw away from Wall Street, has attracted bankers with deep pockets looking to escape from the madness of the trading floor. But not just anyone can receive a ketamine treatment, Ditzell says. There is a lengthy screening process that considers the person’s psychiatric history before determining if they qualify 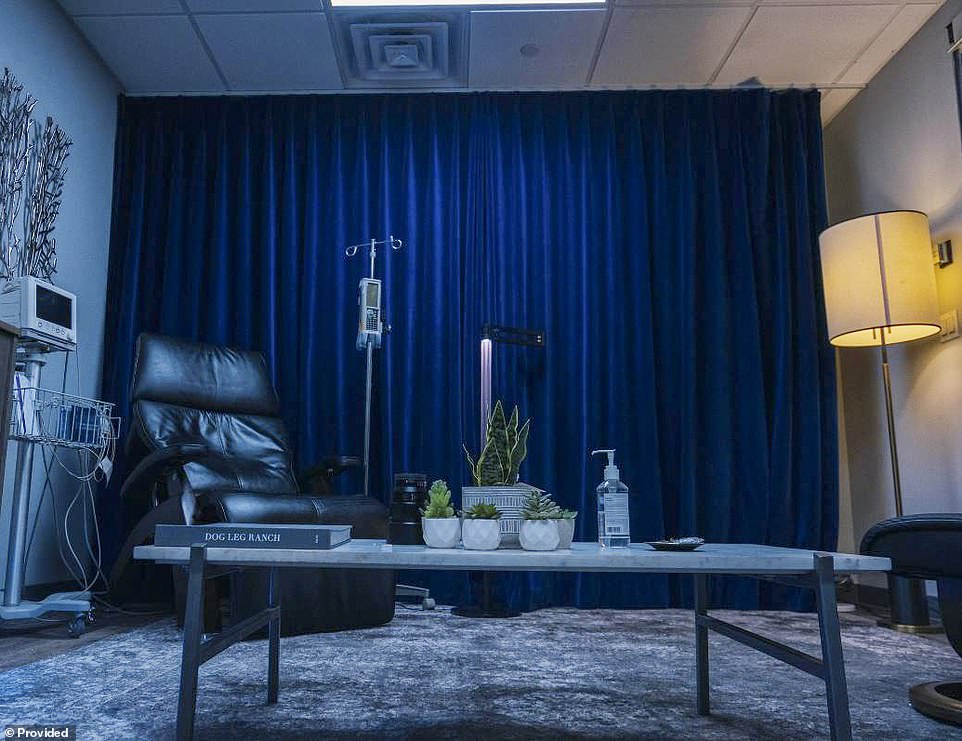 In a treatment room at Ditzell’s clinic, patients spend an hour outfitted with a sleeping mask while listening to theta brain waves, which are at the dominant frequency in healing, high creative states, and remembering emotional experiences. Patients report feeling ‘stoned’ with many saying they’ve had out of body experiences

People undergoing ketamine infusions report sedating or relaxing effects. Some gain a heightened sensory awareness while many report feeling outside of their bodies.

‘I wouldn’t quite call it psychedelic,’ said David Hogberg, 52, a journalist who underwent five treatments in Washington, DC. ‘But you’re definitely you are, for lack of a better word, stoned.’

Ketamine is a schedule III drug under the Controlled Substances Act in the same category as codeine and anabolic steroids.

Ketamine is a powerful general anaesthetic that is used to stop humans and animals experiencing pain during operations.

It started being used as a party drug in the late 2000s, with people taking it before raves for a more intense experience.

In recent years it has emerged as a possible therapeutic for depression and PTSD.

What are the side effects?

Ketamine causes a loss of feeling and paralysis of the muscles.

It can also lead to people experiencing a distortion of reality, which many call entering the ‘k-hole’.

This is when people believe they have spoken to God or a higher power, which can lead to addiction as they crave that experience.

Ketamine may also cause people to feel incapable of moving, experience hallucinations or lead to panic attacks, confusion and memory loss.

Regular users can seriously damage their bladders, which may need to be surgically removed.

Other risks include a raised heart rate and blood pressure.

Paralysis of the muscles can leave people vulnerable to hurting themselves, while not feeling pain properly can cause…

Read More: Inside one of NYC’s ketamine clinics where hotshots and average Joes are given

WHO renames monkeypox as ‘mpox’

White vision is often benign, but can signal heart or other conditions

Educational Background and Previous Brain Injury May Be Associated With Higher

Why Certain Types of Music Make Our Brains Sing, and Others Don’t

WHO renames monkeypox as ‘mpox’

Licking County Times
Prev Next 1 of 395