TAIPEI (Taiwan News) — Foreign travel has only been available for many Taiwanese for only a few weeks and months due to the COVID pandemic and yet a number of reports are trickling back about misbehavior amongst compatriots traveling abroad.

Recently, local media have picked up a report about a Taiwanese couple who failed to turn up to a hot spring vacation in Japan, and now, there is outrage and anger over a half-dozen Taiwanese trying to share just three bowls of ramen. A foolhardy move if one has any inkling about Japan’s reverence for food and, more importantly, etiquette.

According to a CT Want report, the Taiwanese tourists cooked up a plan to have half of the touring entourage (the men, in this case) enter the small ramen shop and take up stools facing the counter. After availing themselves of steaming bowls of noodles and broth, they would simply exit and allow their wives who were waiting outside to take over their seats at the counter and their respective bowls of ramen.

The unsavory, money-saving plan was going according to plan despite the modest discomfort of light rain outside. But when it came time to swap seats the proprietress of this mom-and-pop ramen restaurant screamed loudly that “no sharing is allowed!”, sending the Taiwanese men scuttling outside afraid to take another slurp.

The group then plotted their next move, undoubtedly for their still-hungry wives. During a break in their culinary travels they found time to share their experiences online. One female member of this group, Xiao-Guan (小罐), gave this restaurant an unforgiving 1-star rating, making this post on-line, noting “the ramen stunk just like the face of the owner.” 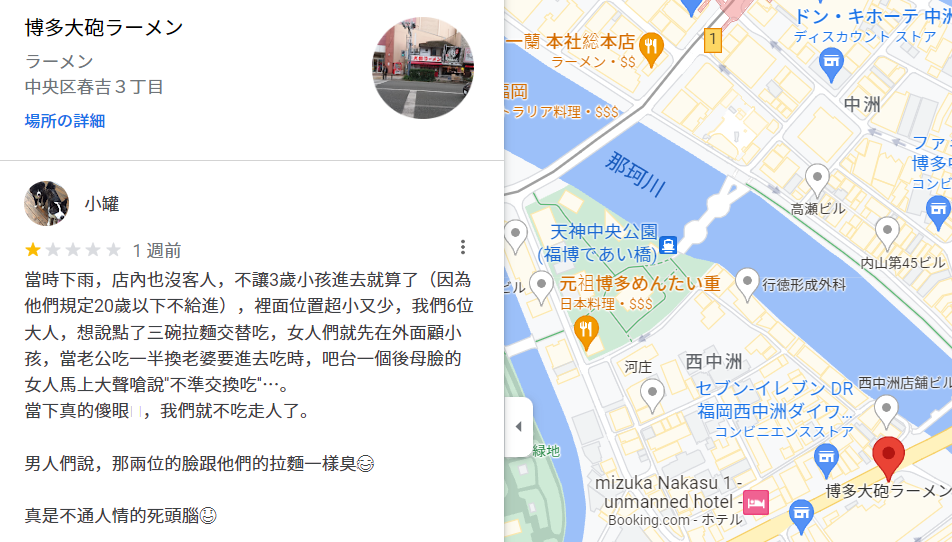 In their defense, the touring Taiwanese didn’t think they were totally in the wrong. Some netizens had their back by saying that sharing is acceptable in other restaurants, so why not in this ramen restaurant? Furthermore, the group said they knew in advance that the restaurant wouldn’t accept anyone under the age of 20 from entering, with one woman volunteering to take care of a 3-year-old child outside while others ate.

Not wanting to leave her by herself, the group decided to eat in shifts as a quick-thinking decision. And if they were going to dine this way, why not save a few Yen by sharing the bowls of ramen? This would also help them eat more delicious food later in the day and protect their appetites rather than wantonly slurping ramen.

The ramen-swapping debacle was quickly picked up by social media. Many netizens were dumbfounded that Taiwanese could actually pull off such a stunt and even boast about it. One person wrote, “you say the boss’s face is ugly and their ramen is bad, but ramen only costs as little as NT$140 (US$4.6) and how much did you spend on a plane ticket to travel there?” Another netizen simply stated the obvious, “if you can’t afford to travel just stay home.”

Dreaming of an Organized Garage